Hello again, I’m Seven. I live the dream in case you can’t, and sometimes eat in crappy restaurants so you don’t have to.

After the wild success of my series “Burgers near the Red-Light,” which literally dozens of people read, it seemed only natural to move on to the 3rd greatest food in the world after pizza and burgers: Mexican food. Specifically, Mexican food strategically placed for the benefit of us artisanal connoisseurs of sweet tang. Ergo, this will be the first in a 3 part series on Latin delights in proximity to the female delights and lights of the 3 red-light districts of Bangkok. Today’s offering: Mexican food near Nana Plaza. As with the burger reviews, eateries will be presented in order of their closeness to the RLD. Let’s get rolling:

Charlie Brown’s Taco Taxi. Distance from the RLD: 10 meters. Situated in the Nana Hotel parking lot opposite Hooters and directly across from the entrance to Nana Plaza is this little gem of a taco truck. They’ve got tables set up against the back wall of the pharmacy with a great view of both Nana Plaza and the freelancers along the sidewalk. Now, take these reviews with a grain of salsa, because everyone knows there’s good Mexican food (from places like California, Arizona, New Mexico, Texas, and Mexico) and then there’s what people in Europe and Asia call Mexican food. In this series, we’re going to be rating the fare on whether or not it’s good “by Bangkok standards.” With that in mind, this little-truck-that-could is pretty darn good. So far I’ve tried the nachos, burritos, tacos, and quesadilla, and they all get my L.A. Native stamp of approval (by Bangkok standards). They even offer 4 different sauces ranging from mild to smoky to hot, and they even make an above average margarita. It wouldn’t be an exaggeration to say I eat there every time I go to Nana. On Seven’s scale from 1 to 10 (by Bangkok Standards), it gets a 7.

Sunrise Tacos Nana. Distance from the RLD: 400 meters. On the corner of Sukhumvit and Soi 7/1 is a recently-opened branch of the familiar Sunrise franchise. Anyone who’s been to more than one of these knows that the quality of the food varies widely depending on the owners. This one’s called “Sunrise Bistro” which seems a little contradictory, but I think the reason for the name is, it’s not a full restaurant. It’s more of an “express” style fast food bar, similar to the McCafe’s that have sprung up in a bunch of BTS stations. They don’t offer a full Sunrise menu and there’s no salsa bar. I ordered a pork quesadilla, which was quite tasty. But it’s not the full Sunrise experience. I got the carnitas quesadilla (220b). It was good. Nothing more, nothing less. If you’ve got a jones for Mexican and you just want a fix, you can get it here. Seven gives it a 6.

The Mexican. Distance from the RLD: 500 meters. Down Soi 4 and round the corner, where Annie’s Soapy Massage used to be, is The Mexican. I’m going to be honest from the get-go and say that I cheated with this one. I ordered a burrito from foodpanda. Look, you can’t really blame me. Every time I went to Nana with the intention of hitting up this restaurant, I always found something better to do, eat, drink, or see. And every time I passed by the place, it looked dead. Granted, it was always during the daytime. But I just couldn’t bring myself to go inside. So I had a carnitas burrito delivered to my place. Travel time from the restaurant to me was 15 minutes, but even that is no excuse for what arrived. A small, limp burrito with some melted jack cheese on top, a side of sour cream and ahem! green lettuce. Inside was carnitas pork. Oh, and a little bit of salsa verde. That’s it. For 375 baht. It tasted OK, but good Lord, could they have put in less effort? Eventually I’ll have to physically go in there to see if they do a better job on site, so keep an eye out for a full review of just this joint in the near future. But for what I got this time, Seven gives it a 4.

Margarita Hurricane. Distance from the RLD: 600 meters. A block down from Sunrise Bistro on the same side of Sukhumvit is this place tries to pass itself off as a one-off family style restaurant. But it ain’t. It’s just another Sunrise Tacos franchise wrapped inside an American package. They have 3 menus: a margarita menu, a Sunrise menu, and a Hurricane menu. The latter has stuff like burgers and onion rings. Off the margarita menu I ordered a “Stormin Norman” (210b). It showed up in a regular Sunrise Tacos glass and tasted pretty much like a Sunrise Tacos margarita—which are pretty good, don’t get me wrong. But the whole thing felt like a con. Then I ordered the enchiladas suizas (245b) off the Sunrise menu, and that’s when the nightmare really began. They arrived smothered in one of the regular Sunrise salsa bar salsas—I think it’s actually the one called “Sunrise.” Now, even a novice should know that enchiladas should be served with enchilada sauce. Green enchilada sauce is made with chile verdes, tomatillas, cumin, chili powder, garlic, and olive oil. It’s not hard to make. So what’s the excuse? Ignorance? Laziness? Whatever the answer, what they served me was an abomination. Seven gives it a 2. Although, since I hate giving bad reviews, I want to draw attention to the rice. It was light, fluffy, and tasted perfect. The beans were the usual horrid insult to the entire country of Mexico, but the rice gets a 10. Oh, and the margarita gets a 7.

Stay tuned for the next episode, and in the meantime you can check out the red-light photo archive on my FB page, or follow me for nightly updates from the gogos @BangkokSeven 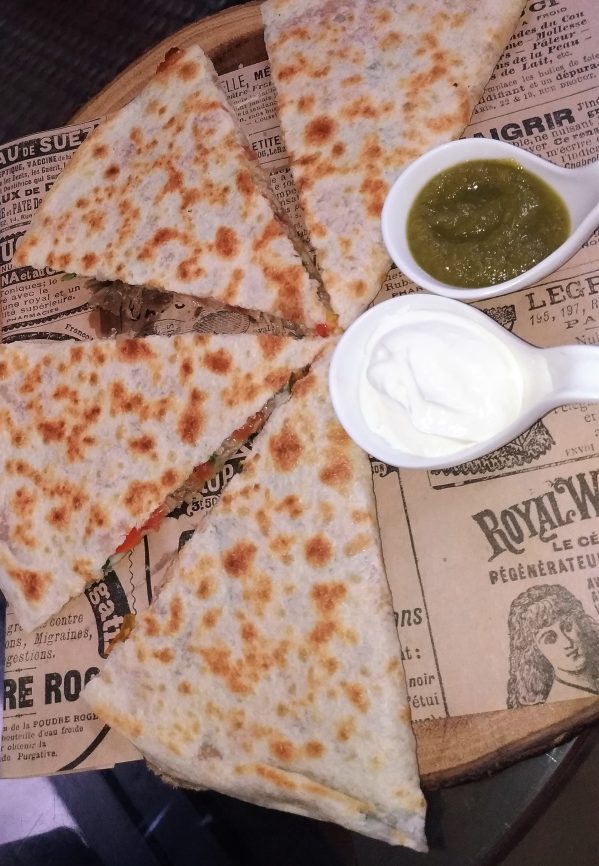